Australian Public Service headcount dropped another 1.8% over 2017, according to the latest statistical update, with thousands of non-permanent staff no longer needed.

For scale, this total reduction is roughly equal to the size of the entire senior executive service and mostly occurred in the non-ongoing section of the workforce, which shrank by 2,297 or 14% over the year.

Nearly all of those were casuals; the number in the APS dropped sharply from 9,217 to 6,967 — around 25% — over the last calendar year. This rapid decline comes after long-term growth that saw their number increase almost five-fold from the end of 2007, when there were only around 2000 on the payroll.

The Department of Human Services shed 1384 casual staff over 2017, according to this year’s data tables.

The number of staff employed under the Public Service Act for limited terms was overtaken by the number of casuals about five years ago. Now the two figures are close to equal again, while public servants hired for a specific task are represented by a very flat line on the 10-year chart (below).

These whole-of-government figures should be interpreted with some caution, as there is also considerable variation between different agencies in terms of how many non-ongoing public servants they employ, and the numbers can obviously fluctuate significantly from year to year in each agency, for reasons that are entirely separate in each case. 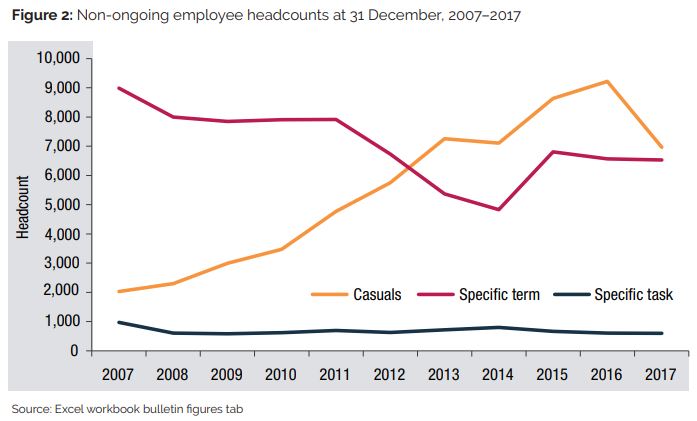 The federal government also finished the year with 473 fewer ongoing public servants, a negligible drop of 0.3% in the larger group with permanent jobs.

The APS commission reports the latest total “December headcount” of 150,489 is the lowest in the past 10 years, but this is an incomplete picture. The federal government’s human resources agency does not report on how many contractors of various types are employed across the service, as it recently explained to the Joint Committee of Public Accounts and Audit.

Women now make up 59.1% of the total APS headcount and continue to move into mid-level and senior executive roles at a faster rate than men, narrowing of the disparity in this regard.

The diversity chart shows no dramatic changes over the past 12 months in the very flat 10-year trend lines for people with disabilities, Indigenous public servants and those for whom English is either their or their parents’ second language.

The Department of Home Affairs absorbed 403 APS staff, including 55 with non-ongoing jobs, from the Attorney-General’s domain and another 267 from Infrastructure and Regional Development, five of whom are non-ongoing. Another 29 went across to the new national security portfolio from Prime Minister and Cabinet, including two with limited-term roles, along with 19 permanent public servants from Social Services.

ASIC gets out of the act

The Australian Securities and Investments Commission now has another option to avoid public service staff caps and questions about contractors from Senate committees, because it has been freed from the confines of the Public Service Act 1999 as part of a package of reforms for the corporate regulator.

This will give ASIC “greater operational flexibility”, according to Minister for Revenue and Financial Services Kelly O’Dwyer, who also has responsibility for the APS.

According to the minister, the agency can’t hire “the most appropriate people” to do its job unless it is unchained from the APS employment arrangements and goes the same way as the Australian Prudential Regulation Authority and the Reserve Bank.

“To be able to perform their roles effectively in accordance with their legislative mandate, regulators need to be able to attract and retain suitably skilled and experienced staff,” O’Dwyer said in a statement.

How to transform school education in Australia over the next decade