Australia’s Consumer Law may be among the strongest in the world, but global giants of retail and online haven’t traditionally changed practices for a few million antipodeans. The same cannot be said of the European Union laws, which has seen companies like Google fined €2.4 billion and Apple forced to repay €13 billion in dodged taxes. Now Facebook appears to be changing world-wide privacy policies to avoid EU retaliation.

So is the EU the real champion for consumers in smaller nations like Australia? Not so fast… literally, not so fast. EU antitrust, while powerful, is a slow moving machine, and its member states have competing priorities for its legal machinery.

And should United States law be discounted entirely?

These questions were answered in a recent forum hosted by the Stigler Center, University of Chicago Booth School of Business. But in case you couldn’t get to Chicago last week to catch up with half a dozen Nobel laureates in economics discussing antitrust, data and privacy policy, you can catch up via video.

Here’s a snippet on the Mark Zuckerberg testimony from Bill Kovacic, former commissioner and chair of the US Federal Trade Commission, and now co-editor the Journal of Antitrust Enforcement and director of the Competition Law Center at George Washington University Law School:

“…the matter of concern is that Facebook executed a unilateral change in their existing privacy terms, that is they told their users we’ll do X, and then they change to a regime that was X minus — that’s one hypothesis — if that’s what happened, one wonders where’s the German Data Protection Authority?

“When I was at the FTC I listened to interminable tedious lectures from the German Data Protection officials about how robust the German regime was, how weak the US regime was … so far as I can tell they’re missing in action. That is, they haven’t shown up. I think I have an interpretation of why: their remedies are very weak, they’re exceedingly weak. The remedy for abuse of dominance under the German variant of 102 is powerful up to 10% of global turnover. One way of looking at it is they’re bringing the case because the data protection regime as it existed then would be weak.

“After the GDPR it’ll be the Data Protection Agency that brings the case, but here’s a bit of a trap you can come into which is a form of regulatory leveraging you can use one regulatory scheme to leverage outcomes in another where if you had to bring a standalone case in the other regime that would be harder. When we did the mergers at the FTC … DoubleClick, but when we did AdMob there was enormous pressure from the Bureau of Consumer Protection and the data team to put data specs into the second request — not for the purpose of challenging the matter itself, but to use the second request to learn more about Google’s data protection program. The Bureau fought that off, there was hand-to-hand combat…”

One of these discussions from the forum has been uploaded. Watch the video by clicking the image below: 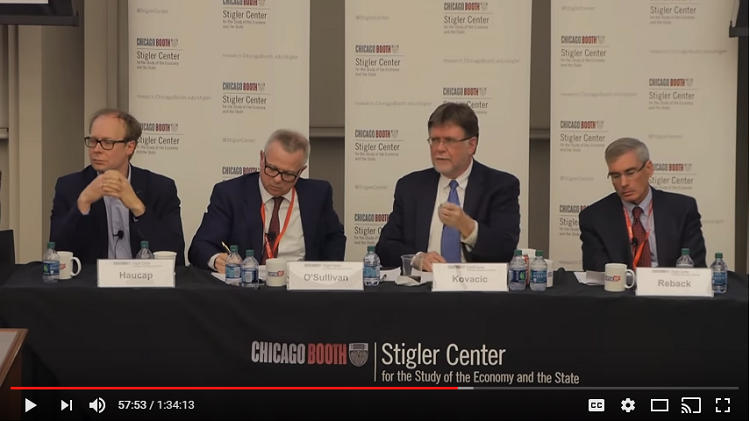 “Questions about digital markets and competition have begun gaining prevalence and commanding more regulatory attention. While the EU has taken aggressive measures against the digital platforms, including a €2.4 billion fine on Google and introducing significant privacy laws (GDPR), regulators in the United States have demonstrated a more lenient approach. What are the strengths and weaknesses of the EU versus US policy choices?”