The transformation of the public sector continues in Finance Minister Mathias Cormann’s 5th year in charge of agency resourcing with a focus on a smarter, more productive government workforce.

Staffing across the Australian Public Service is broadly steady — see below for portfolio winners and losers — but it will be investing in skills development to support greater capability, as the demand for government services continues to grow.

Or to put it another way, the earlier pain — think efficiency dividend, staffing caps, machinery of government changes, the amusingly-named Operation Tetris, and bumpy experiments in digital government — is starting to pay off.

Cormann’s vision — he calls it a roadmap for ongoing reform — leans heavily on technology advances:

“By continuing to harness technology, and by adopting new ways of working, the govenrment is driving a smarter and more productive public sector that is best able to meet increasing demand for services and the changing needs and expectations of the population, while maintaining strong fiscal discipline.

“Advances in technology allow the APS to make improved use of data to inform policy decision and drive service improvements. At a time of significant global economic and social change, it is important that the public sector becomes more agile and innovative.”

Two independent reviews to be concluded in the 2017-18 period will likely have a major impact on the thinking within the sector as organisations and thought leaders make their submissions.

The Independent Review of the APS, announced last week, will come in with a cost of around $9.8 million, drawn from existing funding for the Prime Minister’s portfolio. The expert panel will report at the end of this period.

The independent review of the Public Governance, Performance and Accountability Act — the bible of rules for running a government entity — will report within this period.

The Department of Finance isn’t waiting for the PGPA review’s final results though, perhaps spurred by the Senate inquiry into government procurement standards. Finance will be working with agencies to improve reporting systems and procurement practices in this period, according to Cormann.

The long-awaited digital annual reports will be piloted in late 2018 through a transparency portal along with other mandated data reports and corporate planning documents.

Automation of manual business processes is a significant part of the government’s vision for a more efficient public service. The rebadged Service Delivery Office — one of the Shared Services hubs that collectively now provide services to 35% of federal agencies, estimate to reach 90% by 2021 — was singled out with a mention for its successes in automation of corporate services while keeping staff engaged in more worthwhile work (“evidence by a 250 per cent increase in employee engagement scores”).

The Government Business Analaytical Unit will conduct a pilot during this period into the productivity of core public service functions like corporate services.

Work continues on reforming grants administration into two specialist hubs — one for business, one for community.

Data integration is, like last year’s budget, a major theme for improving the policy, delivery and evaluation of government programs. Work continues on the Data Integration Partnership (DIPA) along with the newly announced Consumer Data Right. BLADE — the Business Longitudinal Analysis Data Environment at the Department of Industry, Innovation and Science — was singled out for mention for its ability to investigate the drivers of productivity and draw on real world experience to better target industry support programs.

Agencies will be called on to share their expertise, facilities and tools to create a centre of public sector excellence, building on the existing Public Sector Innovation Network.

New funding (and costs) coming to the sector

Security clearances will cost applicants a bit more, but should be processed faster, if the government’s plans in the Home Affairs, intelligence and security space pan out.

Some agencies must have been cut a little too close to the bone, as they’ve received funding increases to keep doing the job they were already doing.

There’s a lot more money, more than $600 million that was identifiable, for government’s digital capability.

There are a number of moving parts, in theory working in tandem, to identify reform opportunities and build continuous improvement. They include the newly announced Independent Review of the APS panel, plus the 19 departmental secretaries, and key agency heads like Australian Public Service Commissioner John Lloyd and the Digital Transformation Agency’s Gavin Slater working together on that shared goal.

Cormann and Treasury Scott Morrison have been entirely silent on decentralisation, but a small mention was made in Nationals leader Michael McCormack’s contribution:

“Our government is committed to a practical, planned decentralisation agenda supporting the growth of our regional areas and connecting government agencies with the communities and citizens they serve. A significant number of Australian public sector jobs are alrady being located in regional areas and, as part of its Decentralisation Agenda, the government is continuing to move positions from Canberra, central Sydney and Melbourne. The government will continue to identify and announce options for further decentralisation throughout 2018-19. Government investment in decentralisation is just one part of the puzzle and we continue to provide conditions that encourage private sector businesses to take advantage of the wonderful opportunities outside our capital cities by relocating to the regions.”

“Continued restraint” — that’s how the finance minister has described a minor bump (0.6%) in the size of the federal government’s workforce.

It’s steady, but “more experienced than ever” says Cormann, citing the median length of service for APS staff at 10.5 years.

Departmental expenditure as a percentage of total government expenses and Average Staffing Level as a proportion of the Australian population. 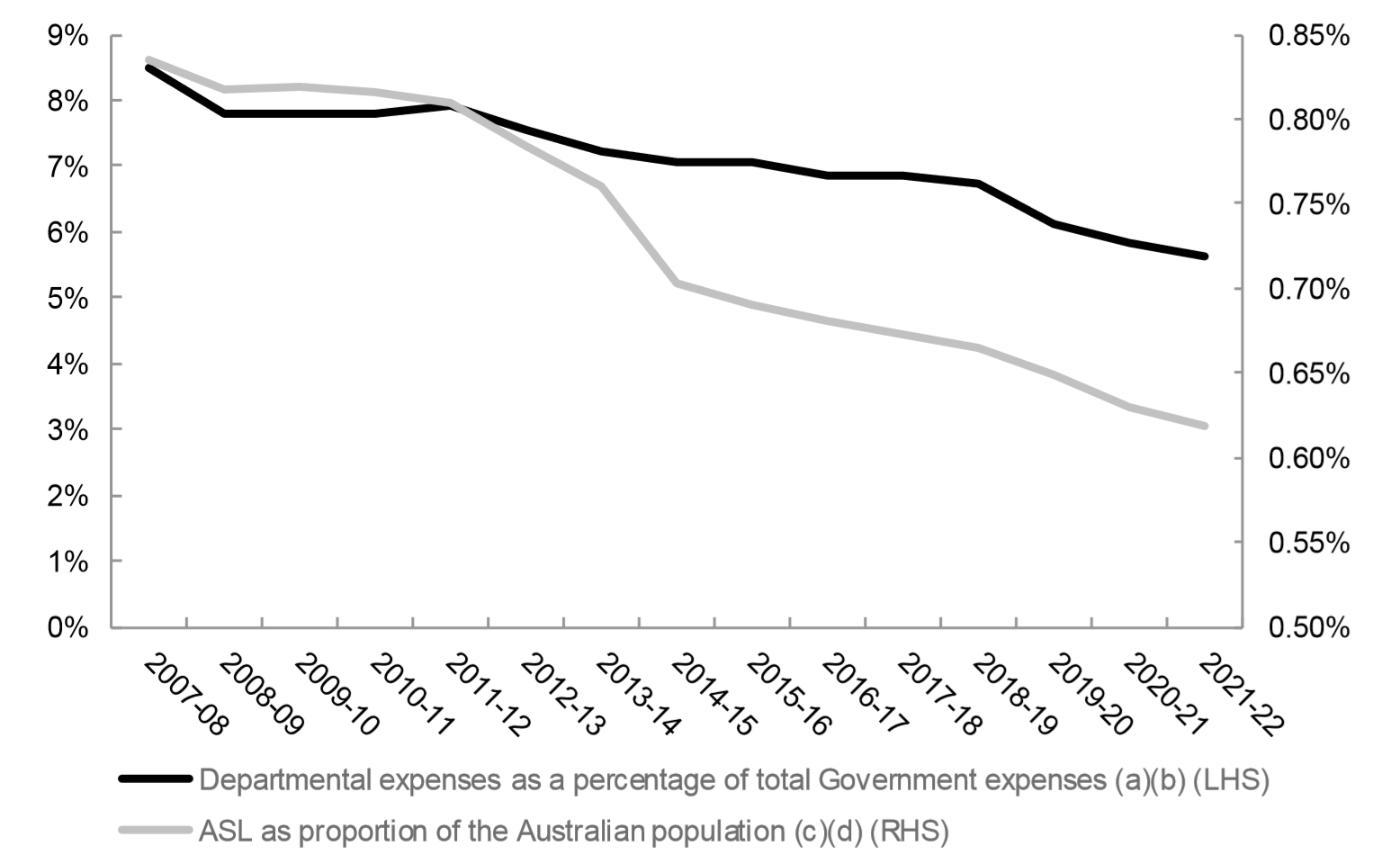 The raw numbers reveal an additional story: average staffing levels for the general government sector is estimated to grow to 167,484, higher than its ever been since the Coalition took office in 2013 — an extra 912 on last year, or 1836 on its lowest watermark for this government three years ago.

The military and reserves sector will see an estimated ASL bump to 79,644 — its second highest level in the last two decades.