The City of Melbourne is asking residents which way they would like to go in terms of transport options for the future, balancing out various factors like congestion, pollution, convenience and cost.

With the new breed of taxis like Uber and Lyft already on the scene, casual hire-cars and bicycles increasingly distributed around cities, car parks getting smarter and newer technology like self-driving cars and robotic delivery services coming soon, the path ahead is not clear.

With a new discussion paper on emerging smart-city technology, part of a series that will feed into development of a new transport strategy later this year, the council aims to solicit feedback on various options like an idea from Finland called “mobility as a service” (MaaS) — a naming convention borrowed from cloud computing.

This allows commuters to choose from a mix of public and commercial transport options, from buses and trains to taxis or rental bikes, depending on where they are going that day or perhaps the weather, and to enable central management of the movement of people and goods around the city. As always, this kind of data is a double-edged sword: privacy risks would need to be carefully managed and clearly explained.

“To prepare for new technology, new mechanisms for data protection are required,” the discussion paper states. “Robust and secure sensor network technologies need to protect the community against possible data/sensor tampering. Additionally, secure data practices must include users having full control of how their data is used.”

The Finnish can use an app called Whim, which allows various payment options ranging from one-off fees to monthly subscriptions for unlimited travel. It appears to currently be available in Helsinki and parts of the UK, and is coming next to Belgium and the Netherlands.

“Participating services provide data so it can be centrally managed to provide visibility for users and improve transport planning,” says the City of Melbourne discussion paper. “New regulations discourage competition between public and private modes.”

One big issue is sharing public space, and another useful idea put forward for Melbourne residents to consider is  third-party platforms to enable this. A key issue for council is how to plan a future that doesn’t leave the city in an ugly, congested mess that is difficult to navigate on foot. 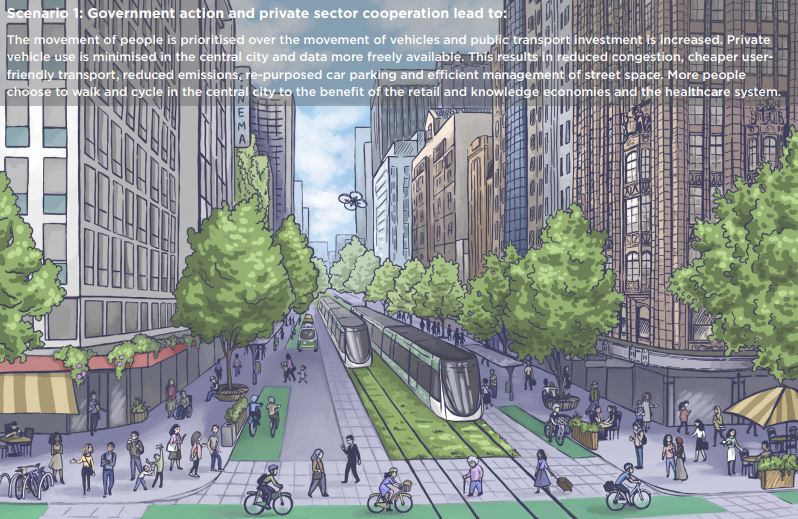 “With information available about parking availability, demand and vehicle arrival time there are new ways to manage these spaces. 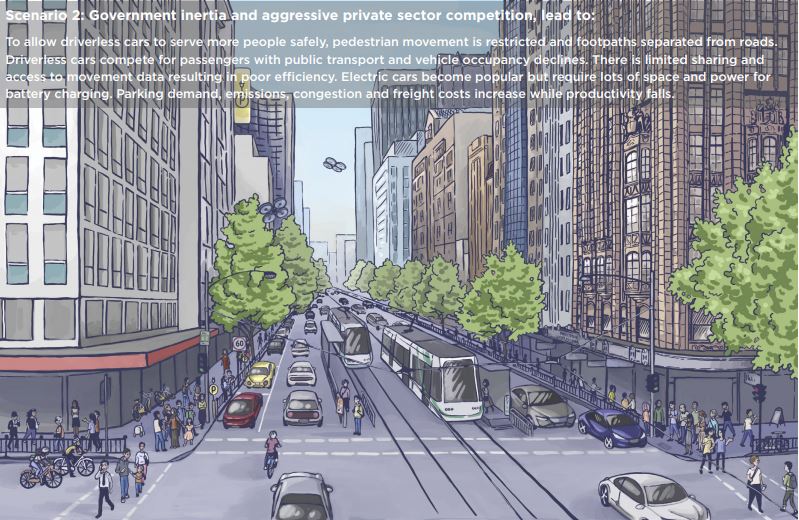 The question for city governments is not just which new services and technologies to encourage, and how to regulate them, but how to bring them all together into a cohesive smart city — and this will be no mean feat.

Driverless cars could increase congestion; one way to solve this could be charging their operators an extra fee when they drive around empty, the paper suggests, and they could also be forced to automatically pull over and give way to buses and trams.

The idea of robotic cars “circulating streets instead of parking” sounds undesirable, but they can also increase mobility for people who can’t drive due to various reasons, including their age or abilities.

“These new trips may have positive or negative social, environmental and economic impacts,” notes the paper. “The degree of uncertainty makes it challenging to foresee the outcomes. Automation will impact the entire economy and generate changes to the types of employment opportunities available in transport industries.”

They also come with their own data privacy issues.

“Driverless cars will require large amounts of data to operate, and will also generate new data linked to location, safety, destinations and habits. This data will be of value to different parties and will raise significant privacy issues if linked to identities of passengers.”

“However, operators of driverless fleets may want to maximise the distance their vehicles travel and compete with public transport,” the paper adds, suggesting it has concerns about allowing a lightly regulated free market.

“Shared driverless services might also use advertising in vehicles to provide more competitive user costs. This would result in providers trying to capture more of passenger’s time and attention, rather than providing efficient transport.

“Competition between public and private transport providers needs to be minimised to ensure an efficient, integrated transport system.”

A range of “smart sensors” can link old forms of transport into the smart city and allow for better traffic management using traffic lights, while flying robots could reduce the number of delivery trucks and bicycle couriers on the road.

“The opportunities presented by smaller driverless delivery vehicles are of greater potential than driverless passenger cars in the central city,” states the paper.

Walking is the subject of another discussion paper, and the technology-focused one makes it clear that this will always be a priority. Low speed limits are here to stay.

“Technology advancements and innovation are important and will be supported and enabled. However, our priortity must be a city for people. Pedestrian safety and priority will remain critical in our people focused city which must look, feel and be safe.”