Tax cuts, health care, education and infrastructure were the dominant topics for news media articles, while on social media only one topic captured Australians’ attention — and they weren’t happy about it.

If the public is worried about data harvesting from Facebook, it hasn’t stopped the growth of Australians continuing to have their say on social platforms like Twitter.

Meltwater analysed a sample set of 29k public Twitter posts and 3369 new online articles that were published between 7.30pm Tuesday and 8.00am AEST Wednesday to gauge what and who got Australians talking, and how they felt about it.

Popular hashtags: While #budget2018 was always going to be a trending hashtag (68%), along with #auspol (32%), #keepmy10dollars was almost as popular (29%). The backlash campaign began before Treasurer Scott Morrison even began his budget speech, thanks to drops the government made to newspapers in the days leading up.

Popular topics: News media was decidedly balanced in their choice of topics with a near-even split in articles focusing on tax cuts (24%), healthcare (24%), education (20%) and infrastructure (19%).

Social media conversations, however, had only a single plurality: tax cuts (36%).

Environment and education were the next most popular with each making up just 11% of tweets on the night. Healthcare and welfare were each mentioned in 10% of tweets. ABC cuts were mentioned in 6%; the economy in 4%, housing in 4%, infrastructure and superannuation each in just 3% of tweets.

Sentiment: The overall social media sentiment was 50% negative, 45% neutral and 5% positive. By topic, the sentiment varied a substantially, but positive sentiment wasn’t more prevalent than neutral or negative in any one topic. 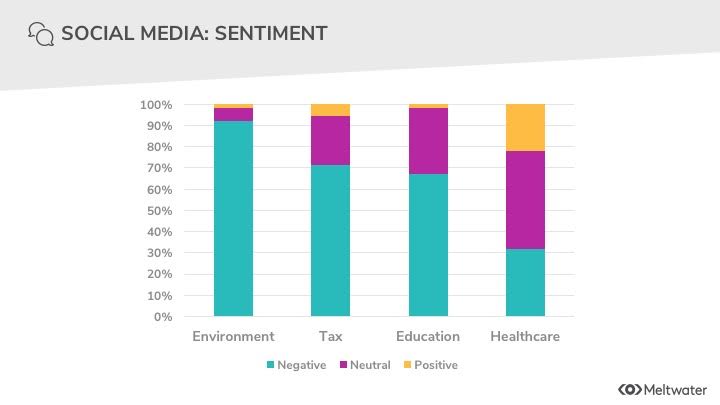 Of course, that negativity wasn’t seen in the online media articles covering those topics. Just 9% of articles included negative sentiment of the budget. Positive sentiment was seen in 24%, while 67% were neutral.

Influencers: Bill Shorten’s account had the highest engagement of the night with budget-related posts (3000), with the Liberal Party account (1618) and Richard Di Natale’s account (1575) highly liked and retweeted.

Beyond the party leaders and official party Twitter accounts, a few individuals had very high engagement during the immediate post-budget period. Quentin Dempster’s screenshot of the ABC cuts was popular enough to generate nearly 800 retweets and more than 600 likes. On the same topic, Mike Calton and Alice Workman both had highly popular tweets.