Women’s lack of progression in the workplace and the gender pay gap is often blamed on women; women are told that behaving more confidently will result in workplace rewards. Leonora Risse (@leonora_risse) of RMIT University reports on an Australian study that challenges this advice, and suggests that organisations would be better off valuing the characteristics that women bring, rather than expecting them to become more like men.

Why aren’t women leaning in?

One of the most common words of advice offered to professional women these days is that we are ‘not confident enough’; that we need to be more bold, assertive and self-assured — like men. An array of self-help books, most notably Sheryl Sandberg’s Lean In, and the myriad of career coaching clinics on offer that are tailored for women, effectively send the message to women that this personal deficiency is one of the key reasons holding back our career advancement in the workplace.

There is a degree of truth in this: psychology research indicates that women harbour lower levels of confidence than men, are less willing to take risks, and are less inclined to act competitively. Women tend to be less willing to put themselves forward for a challenge, which matters for professional career advancement because often this is the type of behaviour that helps propels you up the career ladder.

It therefore sounds logical that boosting women’s confidence will help to equalise the playing field with men in workforce outcomes. Recent research indicates that workers with a greater willingness to put themselves forward for a challenge generally experience higher wage rates. Cultivating more confidence among women is certainly well-intentioned advice, as it is waste of potential if women unduly shy away from opportunities that make full use of their skills and capabilities.

However, if we explore the link between workers’ personality traits and career outcomes more closely, it becomes clear that the solution to closing the gap in men and women’s workforce outcomes is not as simple as telling women to adopt the same confidence levels that many men have.

What does the research show?

I recently conducted an economic analysis of a nationally representative dataset of 7500 Australians, spanning workers across all industries and occupations, explored the link between workers’ confidence and job promotion outcomes (this data is available in the Household, Income and Labour Dynamics in Australia (HILDA) Survey in 2012.) Confidence was measured by a well-established set of survey questions used in psychology that asked respondents how willing they are to put their capabilities to the test (conceptualised as ‘hope for success’) and how apprehensive they feel about performing badly (conceptualised as ‘fear of failure’). In the psychological literature, this dimension of personality is referred to as ‘achievement motivation.’ 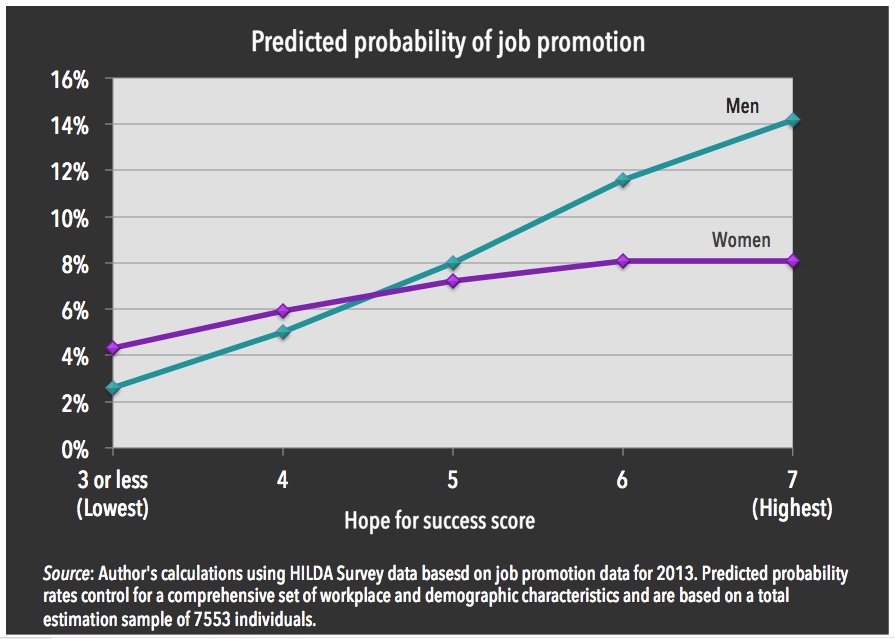 The analysis also found that men who showed strong levels of extraversion or a sense that outcomes are within their control (measured by a psychological trait called locus of control) were also more likely to get a job promotion. It makes rational sense that determined, extraverted people are suited to positions of leadership. But it doesn’t make sense that the favourable impact of these personality traits only applies to men, and not to women.

What factors could explain these findings?

The finding that promotion outcomes tend to systematically favour confident men over confident women suggest that many organisations — and society in general — tend to think about effective leadership and performance in ways that are defined in ‘male terms’. If asked to picture a successful leader in a workplace environment, most people will typically visualise a confident man. This is a likely reflection of the social conditioning effects of the world in which we live, where we mainly observe men filling the roles of leadership and authority, a power structure that is reinforced by our current institutional structures and cultural norms.

The finding that this male confidence effect appears more prominently in many male-dominated parts of the workforce — the mining, transport, postal and warehousing industries, and amongst trades, technicians, labourers and also at management level — lends further weight to the argument that these outcomes are being driven by gender-based stereotypes and assumptions about effective leadership and performance.

The gender discrepancies detected in this study of the Australian workforce are consistent with many other international studies which find that women experience lower rewards compared to men — and at times even a penalty or backlash — for demonstrating ambition, confidence and assertiveness in the workplace (see for example Bowles, Babcock and Lei 2007; Catalyst 2007; Ibarra, Ely and Kolb 2013; O’Neill and O’Reilly 2011). The reasoning behind this is that women who show ambition and authority are contravening gender-patterned cultural norms and expectations of behaviour. Failing to conform to traditional gender norms destabilises how society is ‘used’ to functioning and challenges the authoritative status that society traditionally afforded to males, which can subject these women to negative repercussions for their behaviour (Eagly and Wood 1991; Eagly and Karau 2002).

Even if women manage to reach leadership ranks, other studies have found that successful women tend to display characteristics that define successful men. For instance, a study of the personal attributes of executives found that both male and female executives tend to exhibit ‘classically masculine’ personality traits. This implies that the recipe for leadership for women is to become ‘more like a man’ — a recipe that diminishes the opportunity for women to bring their own leadership styles and attributes to the workplace, which can be equally, or even more, valuable and productivity-enhancing.

The tendency for male traits to be rewarded in the workplace could also be the result of people who are in positions of power being swayed by similarities between themselves and the candidate — a concept known in psychology as affinity bias. This unconscious bias can lead people to favour those with whom they share something in common, even if it is unrelated to their capacity to do the job. The result is that leadership appointments tend to reflect the profiles of those who are in the positions of authority and making the appointment decisions (Gorman 2005), creating a self-reinforcing concentration of men in leadership positions.

This affinity effect is likely to be heightened when confidence is part of the equation: past studies reveal that confident men, when in evaluator roles, tend to overestimate the performance capabilities of other men while under-estimating the performance capabilities of women (Albrecht, von Essen, Parys and Szech 2013). This arises because men tend to project their self-confidence onto other men, though not onto other women. Furthermore, the effect of confidence can also contaminate an evaluator’s decision as there is evidence that overly-confident candidates tend to be perceived, in the eyes of others, as more competent than they actually are (Anderson, Brion, Moore and Kennedy 2012).

What is the fallout of these outcomes?

The effect of gender biases in workplace outcomes is not just a matter of inequality. Organisations also run the risk of poorer overall performance or an economic fallout, as there is little evidence to suggest that confidence actually equates to competency. In fact, the evidence points more toward the other direction: that overconfidence leads to poorer judgements and worse performance (Barber and Odean 2001; Invernizzi, Menozzi, Passarani, Patton and Viglia 2016; Malmendier and Tate 2005). Assessors who rely on confidence as a proxy for competency could be engineering poor job matches leading to sub-optimal performance outcomes for the organisation.

The detection of systemic biases towards male personality traits implies that we shouldn’t be placing the onus on women to change their behaviour. This body of research should be a wake-up call to organisations to focus more on changing their practices instead.

Practical solutions to change workplace practices — and mindsets — are available. In the publication What Works: Gender Equality By Design, Professor of Public Policy and behavioural economist at the Harvard Kennedy School Iris Bohnet, and other researchers at the Harvard Business School, have compiled a suite of action-oriented strategies to shake up organisations’ conventional ways of thinking and sharpen our awareness of how gender stereotypes, biases and personality traits may inadvertently contaminate job recruitment and promotion processes.

To avoid conflating confidence with competency, organisations are well advised to carefully evaluate their processes for assessing candidates and to separate out the characteristics of applicants that directly matter for the job from those characteristics — such as confidence — that are unrelated to a candidate’s capability.

One way to do this is to give the candidate, in addition to the grading them according to the required criteria, a ‘confidence score’. The score does not need to enter into the decision about their suitability for the role, but it compels the assessors to mentally differentiate between the candidate’s confidence and the other attributes and capabilities that do matter for the job. This process can help steer assessors towards more merit-based decisions. And, as Deputy Chair of the Australian Productivity Commission Karen Chester advised in an interview with the Women in Economics Network, “the best workplace for women to succeed in is one where merit matters most”.

What should we do with our ‘Lean In’ self-help books?

While the ‘Lean In’ movement is still likely to support the advancement of women by encouraging more women to select into the applicant pool for job promotions, this new research implies that the ‘Lean In’ advice needs to be accompanied by some caveats.

An insightful finding from other Australian research is that women tend to show higher levels of conscientiousness than men — the capacity to be organised, diligent and attentive to details. This trait, unlike confidence, has been proven to be associated with better performance outcomes (Cubel, Nuevo-Chiquero, Sanchez-Pages and Vidal-Fernandez 2016). Women also tend to be more agreeable than men — a trait that lends itself to more co-operative, team-oriented working styles, despite being associated with lower pay. The evidence is there that women have the potential to contribute in productive ways to organisations: but it is up to organisations to recognise and embrace this.

The take-away message: instead of encouraging workers to converge to a stereotype norm that prescribes success as a function of confidence, organisations would be better off focusing on the productive value offered by diversifying the suite of personality characteristics present in their workforce and leadership teams. This direction is supported by a growing body of research quantifying the economic gains of organisational diversity (Hunt, Prince, Dixon-Fyle and Yee 2018). It also accords with emerging perspectives on gender equality — such as Catherine Fox’s publication Stop Fixing Women — that steer away from the ‘lean in’ movement and the notion that women are at fault.

There is a risk that placing the focus on ‘fixing’ women is deflecting our attention away from the deeper issue: tackling the engrained gender biases that still permeate many organisational practices and our everyday thinking. The payoffs to women of ‘leaning in’ can only come to fruition when organisations evolve to more fully recognise the value of women and the productive skills and attributes that they offer. It’s competence — not confidence — that should truly matter for job performance.

This policy analysis piece was originally presented at the inaugural Australian Gender Economics Workshop, held in Fremantle, Western Australia, on 8 and 9 February, 2018.

This article was first published by The Power to Persuade blog, from RMIT University.