The Department of Infrastructure, Regional Development and Cities has confirmed in budget estimates that the federal government has made little progress with its plans to spread more public service jobs around the country.

Only 98 positions have been chosen for relocation so far and most are being moved between capital cities, such as 40 jobs going to Adelaide from Canberra, which still has the largest single concentration of Australian Public Service staff, although there are more in total located elsewhere.

Another 25 are moving from inner Sydney to Parramatta, a growing satellite within the same sprawling metropolis, and 10 more are being moved from Canberra to Darwin. Only 16 are moving out of the city to true regional centres.

On Monday, opposition senator Glenn Sterle probed the stalled program, which has not turned out as suggested by former Nationals deputy Fiona Nash last year, with departments having to produce business cases framed in the negative, in terms of why particular jobs should not be swept up in the decentralisation plan.

The recent establishment of the Regional Investment Corporation in the New South Wales town of Orange aside, there’s been little action, as the budget revealed.

One reason for that might be the constant turnover and reshuffles in ministerial and bureaucratic ranks alike that has become normal. Sterle asked how many business cases the department had received, but first the committee had to confirm for him which minister had carriage of decentralisation.

Sterle couldn’t recall ever having heard of John McVeigh, who DIRDC secretary Steven Kennedy informed him is the new Minister for Regional Development, Territories and Local Government.

“S**t. When did that happen?” said the senator.

Moving right along, acting deputy secretary Marie Taylor informed the committee that some work had been done last year following the big announcement by Nash and then-leader of the Nationals Barnaby Joyce.

“Essentially, all government departments have analysed all of their functions for suitability for decentralisation,” Taylor said.

“All of that process occurred in 2017. As a result of that, some opportunities were identified for, if you like, near-term decentralisation, and those were announced in the budget. A further list of opportunities to go through business case processes was identified.”

Seven agencies ready for a move

Seven agencies have indicated they are up for moving at least some jobs as part of the program, she said, but she was reluctant to name them, causing consternation about whether she could refuse in budget estimates.

“This is not North Korea or something,” Sterle said. “We’ve asked a very simple question. There was some fanfare around ministerial announcements about decentralisation. This committee has the right to ask and get the answer.”

Kennedy explained that staff consultation was an important step and naming individual agencies at that point might be “unnecessarily disruptive” if the seven proposed moves didn’t go ahead, offering instead to name portfolios. Then, following a private discussion, he said seven was actually “a very preliminary number” that could still go up or down.

The secretary then agreed to take Sterle’s enquiry as a “contingent question on notice” shortly before Taylor announced the 98 jobs that are definitely being shifted around:

The full discussion can be found, as always, in the Hansard record of the Rural and Regional Affairs committee.

Tuesday recap: APS review and a letter from Mr Lloyd

Yesterday afternoon, newly appointed head of the APS review secretariat in the Department of the Prime Minister and Cabinet, David Williamson, answered a few questions about this latest reform initiative.

“The last review that’s most analogous to what the government has announced” is the famous Coombs royal commission, Williamson told Senator James Paterson, in line with the PM’s announcement.

This will be a “first-principles examination of the APS” that is bigger than any of the reviews or inquires that have taken place in the intervening years, and will look ahead to the next 30. The deputy secretary was also forthcoming on how the review panel was chosen.

“The overall criteria was to get a mix of experience, skills and backgrounds, covering both public and private sector, and academia, some domestic and international experience, so… a combination of skills that collectively, would position the panel to have that sort of comprehensive look at the public service,” he said.

Secretaries, central agencies, the APSC and the PMO all contributed to the terms of reference, Williamson said, however the separate ISA recommendation was informed by a broad public consultation, he added.

“The CPSU was advised that the review was going to be announced, a few days before announcement,” Williamson replied.

The committee also heard the $9.8m budget came from leftover funds that had been allocated to putting on the recent ASEAN regional summit. McAllister also wanted to know if the senior executives had the impression that public servants were “worried” about what the review might bring.

“No, not that I’ve heard, Senator,” Williamson replied innocently.

“Should they be worried?”

At this point, deputy secretary Stephanie Foster chimed in to add that if anything, public servants should be happy. “Senator, I think this an exciting chance for all of us to contribute to what our future organisation looks like, and for that reason the panel will make as many opportunities available as possible for staff to actually contribute to that outcome,” she enthused.

According to McAllister, some public servants feel that “contributing to discussions about the future of their workplace is unwelcome in the current government” and she asked again if they could feel confident about telling the panel what they really think, without fear of “retribution from management” of any sort.

“Yes” was the inevitable answer.

Australian Public Service Commissioner John Lloyd went back to the Finance and Public Administration committee yesterday with a letter that blunted Labor’s attack.

Lloyd’s letter (below) simply states that he is not the subject of any inquiry, but the senators are likely to expect more information in response to a more detailed set of questions he took on notice about the matter.

The committee was told earlier that a complaint about the situation had reached PM&C chief Martin Parkinson, the head of the APS, and he had referred it to the merit protection commissioner. As The Mandarin’s weekly commentator Verona Burgess points out, the current acting MPC is Mark Davidson, a public servant who works under Lloyd in the APS commissioner’s support agency. 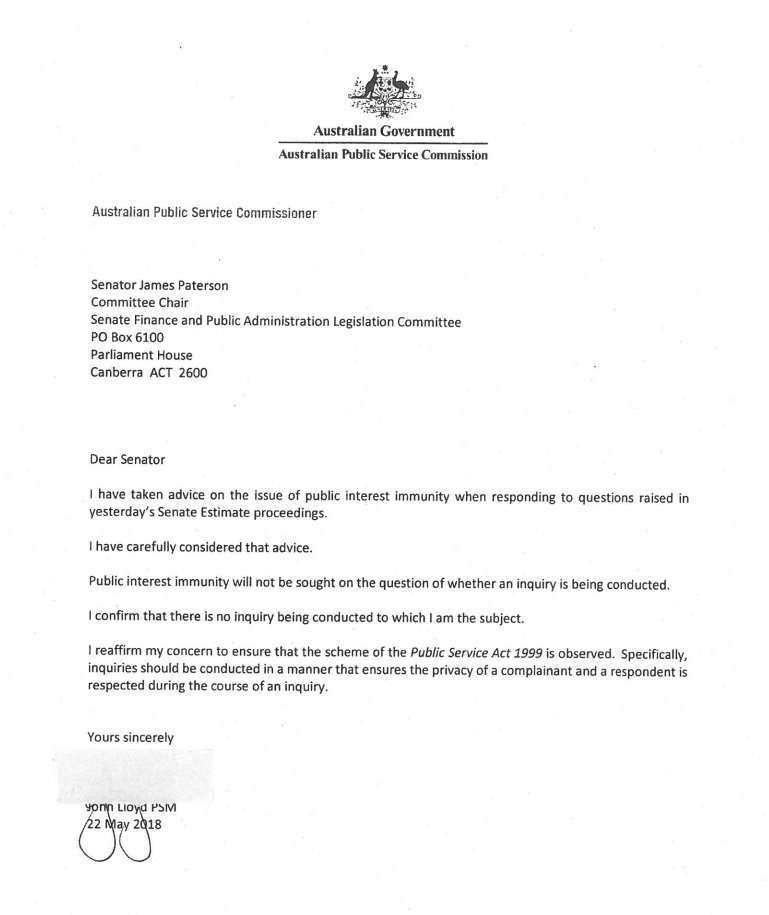