The Commonwealth budget’s four headline papers take up 842 pages. Add auxiliary papers such as the portfolio budget statements, and well over 5,000 pages of budget publications are released. It’s unlikely anyone gets through it all. And yet despite this mammoth information dump, critical issues of public interest are not addressed.

Last year, in The Mandarin, I wrote about the budget’s failure to provide “distributional analysis” by income group, which refers to outlining the budget’s varying effects on the different groups.

The imperative for distributional analysis has been borne out by the response to the 2018-19 budget, with much deliberation centering on the extent to which Morrison’s income tax cuts were indeed targeted at low and middle-income families as he claimed. Distributional analysis provides numbers to cut through political rhetoric, so that fuzzy language like “low” and “middle” can be clarified or dispelled.

There are other areas of public deliberation that can benefit from the application of this principle. I propose five.

Gender equity is perhaps the most discussed aspect of social justice in the community today. It is odd how little attention it has received from economic policy-makers. On gender, the budget contains roughly zero.

As with distributional analysis by income, the budget should provide quantitative information on the varying impact of budget policy measures on women compared to men. On average, “small government” policies like lower, flatter tax rates will favour men (because of the wage gap), whereas welfare statist policies will favour women, who tend to draw more on public services and income payments due to disproportionate care-giving responsibilities, maternity needs, longer life expectancy, and so on.

Providing formal estimates can help show the extent to which these generalisations bear out in particular cases, and focus attention on rectifying harmful disparities.

Below is an example of gender distributional analysis by UK organisation, Women’s Budget Group: 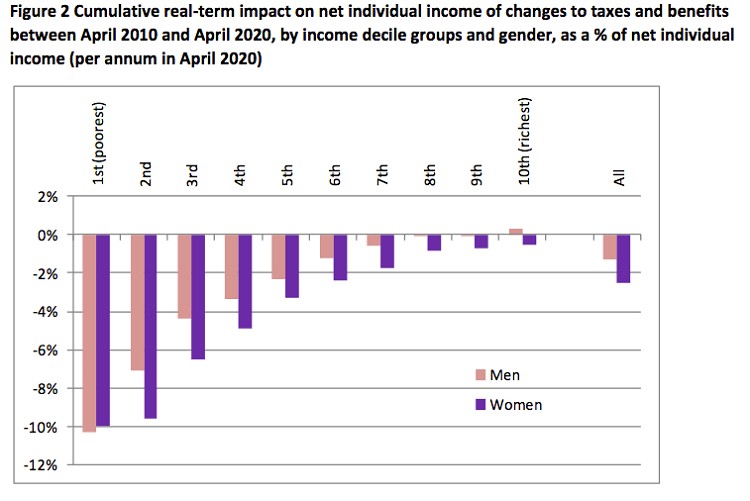 2. Outline the impact of policy measures on spending by function

This is a logical thing to do. People are interested in whether the government’s policies are increasing or cutting funding to education, social welfare, defence and so on. It would provide answers to a common point of public debate.

Confusingly, the budget is currently reported using two conflicting frameworks – cash and accrual accounting. Most whole-of-budget aggregates, such as the budget balance, are reported in both frameworks, but the cash aggregate is regarded as authorative.

When politicians or the media discuss the budget deficit, they are referring to the “underlying cash balance”. But key sub-components of the budget balance – such as expenses by each government function (Budget Paper 1, Statement 6) and by each policy measures (Budget Paper 2) – are provided only in accrual!

The solution is to report the budget in cash at both aggregate and component levels. Accrual data should be provided in addition to cash data when needed to align with international comparative norms (for example, expenditure by function) and where an accrual value materially differs from the cash value.

4. Do not ignore physical assets – give net worth greater prominence

Notwithstanding the previous recommendation to coronate cash as king, some important accrual concepts need more attention than they currently receive.

Comparisons of household to government finances can be fraught, but here is a case where it is appropriate. Any sensible family assessing their financial position would consider the value of a home they owned. If they count only their home loan (the liabilities), and not their house (the associated asset), they will by construction appear deep in the red. This is obviously not a reasonable assessment. And yet that is exactly how we usually assess the government’s balance sheet.

Fixating on debt is not only misleading, it can be gamed with perverse behaviour. It appears easy for our hypothetical family to become rich – just sell the home and rent it back. Suddenly, extra money! Unfortunately, this logic is not foreign to governments. From 1996 to 2001, the Australian Government sold nearly a billion dollars of property assets. The selling spree was largely on bad terms, drawing criticism from the Auditor General and public finance experts. Even though the sales were used to pay down debt, they damaged the government’s overall wealth, its “net worth”.

The budget does provide net worth estimates, but they are sidelined. They should be in the spotlight.

Governments tout privatisation as a fiscal cure-all, a way to fix the budget at the same time as pay for new spending. But as John Quiggin tirelessly points out, Australian privatisations typically do little for net debt and worsen net worth. If the proceeds are then spent on new assets (“asset recycling”), and if those new assets unlike the previous ones do not generate equivalent revenue – for example, selling a power station to build country roads – it is all bad news for the budget. The budget papers can help prevent a proliferation of magic pudding.

Privatisation is not subject to as much transparency as are other budget measures. Under the Charter of Budget Honesty, the government does not have to publish financial estimates of asset sales decisions as doing so could prejudice commercial negotiations. Reasonable. But this sub-optimal situation could be improved by providing an outcome report in the budget update after the sale, addressing the impact on key balance sheet items such as net debt and net worth. It should also provide medium-run projections of foregone revenue.

The budget reporting wishlist outlined above is relatively modest. With thousands of pages released to accompany the budget, it can spare a few to elucidate fundamental questions of public debate.

David Sligar has worked in the Commonwealth Treasury and Finance departments, primarily in budget and social policy areas. He has also worked as a parliamentary economic adviser, including for a former Australian Treasurer and a state Leader of the Opposition.

David Sligar has worked in the Commonwealth Treasury and Finance departments, primarily in budget and social policy areas. He has also worked as a parliamentary economic adviser, including for a former Australian Treasurer and a state Leader of the Opposition.