The Murdoch press has been gunning for cuts to public sector jobs in the Queensland Palaszczuk government over several years now — without success.

Employee expenses account for approximately 40% of total expenses, with the increased cost reflecting both an increase in employees, as measured by full time equivalents (FTEs), and higher wages for those employees from the government’s 2.5% wages policy. For comparison, the total growth in government expenses between between 2016-17 and 2021-22 is forecast to rise at an average annual rate of 2.9% per year.

The Palaszczuk government has adopted a fiscal principle, the papers explain, to maintain a sustainable public service by ensuring that overall growth in FTEs, on average over the forward estimates, does not exceed public population growth. 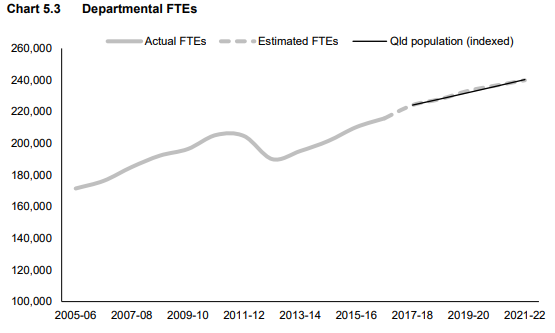 The government’s election commitments put a high priority on frontline jobs — teacher aides, nurses, police officers, etc. — and that’s where a lot of the additional FTEs will continue to be allocated.

Around 32% of FTEs are located outside the metropolitan South East Queensland, “consistent with population share”, the government notes. But it acknowledged that the devolved frontline service delivery models used in some agencies — where agencies themselves determine how to most effectively deliver services — makes it difficult to estimate and monitor FTE allocation.

The Queensland Public Service Commission will continue to collect agency workforce data on a quarterly basis for analysis and reporting purposes, the papers say, to ensure ongoing monitoring of the government’s new fiscal principle.

They’re not pretending it’s been an easy job, so the PSC, with support from Queensland Treasury, have been working on strategies to reduce inconsistencies and improve the quality of their data.

Priorities to improve the quality of information include: