The acting Merit Protection Commissioner for the Australian Public Service, Mark Davidson, has kicked off an inquiry into an alleged breach of the code of conduct by the APS commissioner, John Lloyd.

The inquiry may never run its course, however, unless it is completed before Lloyd’s resignation from the $678,000 job takes effect on August 8, Davidson told a Senate estimates hearing on Thursday.

Today is Davidson’s last day acting in the role before former deputy NSW ombudsman Linda Waugh takes up the post on Monday.

The complaint is thought to be in regard to Lloyd’s email correspondence with the Institute of Public Affairs, a think-tank that is strongly aligned with the Liberal Party and generally has little faith in the public sector, arguing regularly that many of its agencies should be shrunk, abolished or privatised.

The commissioner continues to argue this was all normal and above board and has said he intends to defend his actions strongly. Lloyd says the correspondence was either brief conversations with friends at the IPA, or examples of a government agency providing the group with information, which happens all the time, he argues.

Senator James Paterson, a former IPA deputy executive director and one of many members of the government with strong ties to the partisan organisation, revealed the content of Davidson’s letter at the beginning of the hearing yesterday. 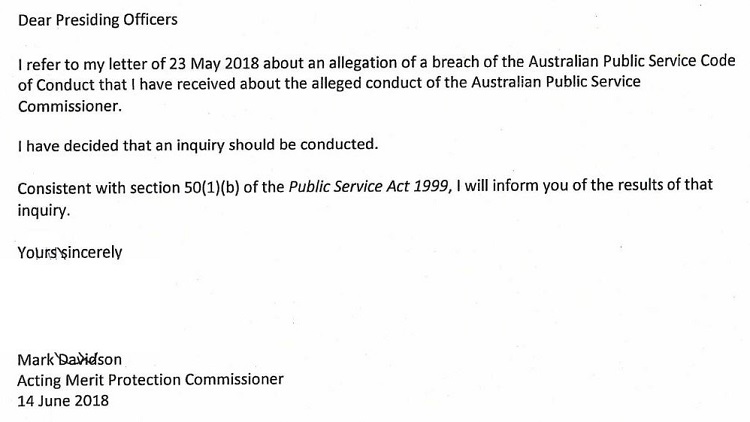 The first question from senator Jenny McAllister was why Lloyd submitted his resignation. “I resigned because it was time, I felt, to go,” he said. “I’ve had a long career; I discussed this with my family obviously, and chose to go.”

Lloyd said he was “certainly not” asked to resign, and said no member of the government or their staff member had even raised the suggestion. He said that earlier this year he raised the possibility that he might retire in about August or September with the head of the APS, Martin Parkinson, and nobody else.

The commissioner told McAllister he was not aware of any of his predecessors being accused of breaching the CoC but said he was not embarrassed by the situation. He agreed that his role involved leading by example, and argued that he had done so.

Acting MPC Davidson, whose regular position sits below Lloyd in the APSC, was assisted in making the decision to commence the inquiry by former secretary of the Attorney-General’s Department, Robert Cornall. He said he took this step to avoid the appearance of conflict of interest because he, in his substantive role, and all other MPC support staff work under the APS commissioner.

Davidson told McAllister he “definitely” did not speak to any MPC staff about the complaint for the same reason, after it was referred to him by Prime Minister and Cabinet deputy secretary Stephanie Foster, who also informed him that a permanent MPC would soon be appointed.

He has also engaged McMillan to begin conducting the inquiry and said he would leave it to Linda Waugh to decide whether she would take it over when she commences on Monday.

In the most controversial emails from Lloyd’s official email account, he provided the IPA with a list of APS employment conditions that it could describe as being overly generous in its various commentaries and submissions to parliamentary inquiries.

Others were jovial conversations with IPA representatives about attempts by Labor senators to question him about these matters in previous estimates hearings, containing mildly critical comments.

Lloyd’s 2014 appointment as head of the central APS human resources agency, which has responsibility for the code of conduct and the whole-of-government enterprise bargaining policy, drew immediate cries of politicisation from Labor supporters based on his past roles, public statements and affiliations.

The role involves advising public servants of how they must not only conduct their professional duties in an apolitical  way, but avoid even the appearance of political partisanship. The commission’s advice includes the warning that private correspondence might create a breach of this obligation, if it becomes public.

Now, just as the opposition and the public sector unions see a slight chance of their nemesis being hoisted on his own petard, he might just slip away into comfortable retirement.