Bespoke contracts don’t need to be 100% bespoke, the Commonwealth’s Joint Select Committee on Government Procurement found last year when it recommended the expansion of standard terms and conditions.

For contracts under $200,000 (and optionally up to $1m) this existed with Clause 10 of the Commonwealth Contracting Suite to ensure consistency and ease of use for businesses contracting with government. The federal committee felt the benefit of that consistency should be extended to all Commonwealth contracts.

The government agreed in part, and the Department of Finance got to work on developing a set of pre-drafted contract terms — a clause bank — that can be used within existing contract templates or in bespoke contracts when appropriate.

This week, Nicholas Hunt, Finance’s First Assistant Secretary, Procurement & Insurance, announced the release of ‘ClauseBank’ with 12 terms which cover a wide range of matters including subcontracting (obligations and removal), fraud control, and a step-in clause that may remove the need to terminate a contract.

The clauses were drafted to reduce complexity for suppliers, Hunt says, but the notes on each highlight how they will benefit the government customers as well. 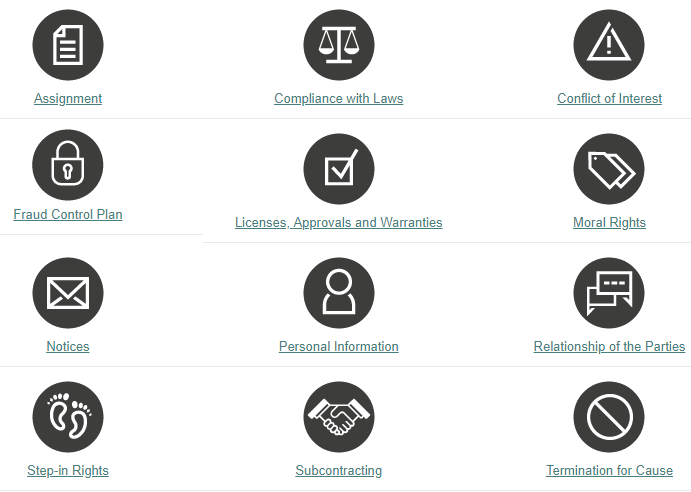 While the committee proposed CCS Clause 10 be mandatory for all contracts, the ClauseBank terms are all optional and not designed for contracts that already fall within the scope of the CCS.

Additionally, Finance warns that to preserve the legal integrity of these terms, they should be incorporated without change other than substituting or adding defined terms.

“If more substantive changes to the wording are proposed, legal advice should be sought to ensure that any change does not impose onerous terms on Suppliers or compromise the Commonwealth’s position.”

A 12 month review of the new Commonwealth Procurement Rules that came into effect on January 1 is still underway.