South African firm Dimension Data welcomed a parade of gawkers including The Mandarin into the ground floor of its Darling Harbour digs last week to see a few examples of exclusive technology available to its clients.

The company’s new Client Innovation Centre opened with six exemplar projects that have made use of cutting-edge bits and bobs found under the massive umbrella of its parent corporation, NTT Group, also known as Nippon Telegraph and Telephone.

The conglomerate has serious scale — 922 subsidiaries, about 282,550 employees and a global consolidated operating revenue above US$100 billion — as well as major research and development muscle. NTT employs about 2500 researchers and invests US$2 billion in R&D annually, group chairman Hiromichi Shinohara told reporters visiting the new Dimension Data facility.

“R&D products and innovations are shared by the NTT Group and are used for creation of new value with partners around the world,” he said, giving an overview of the group and its collaborative “B2B2X” business model. 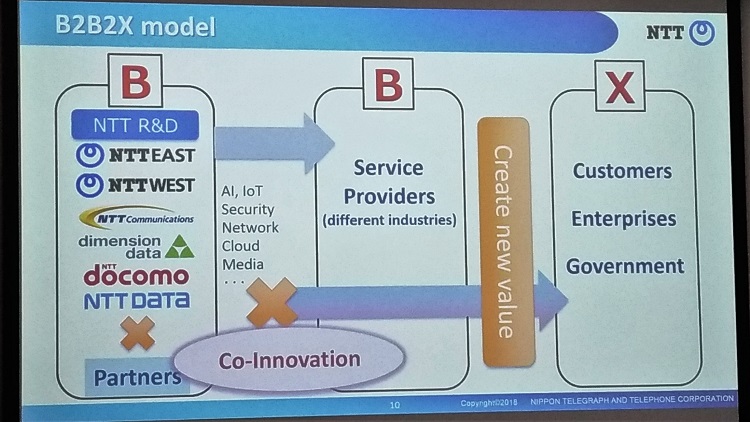 B2B2X basically means NTT moving away from providing services directly, Shinohara explained. “By contrast, in the B2B2X model, we, NTT Group, collaborate with service providers from different industries, which we define as ‘main players’ and … add value to customers through them,” he said.

The ICT behemoth started out as the government telecommunications monopoly in the early 1950s, and remains about one-third owned by the people of Japan after a series of moves to privatise and regulate it to break its market dominance and encourage competition. Today, whichever way you measure these things, it’s an absolute giant.

Dimension Data group CEO Jason Goodall explained the South African systems integrator and managed services provider focused on managing complex “hybrid IT” environments that need constant attention, and had earlier expanded into Australia because it saw a lot of eagerness to adopt the latest technology.

The firm owns the Oakton, SQL Services and Viiew brands, and its Australian arm has about 2000 employees. Local CEO Steve Nola told us he was “blown away” by the scale of NTT’s R&D capability and said this enormous scale explained why the company had opened the CIC. The executives said the first six exemplars were only the tip of the NTT R&D iceberg that Dimension Data can draw on, depending on what its clients want to do.

One fun exemplar is the FLAIM trainer, an immersive virtual-reality firefighting simulation developed by a start-up that came out of Deakin University.

It uses a hi-tech fabric called Hitoe that uses conductive fibres, allowing the trainee’s clothing to detect and transmit a range of vital signs, showing how their stress levels rise when the heat is on. The VR aspect is done well, linked to a full firefighting outfit including oxygen mask, rising heat from the flames and a fire hose that lurches back from the force of the simulated water. The tech stuff is cleverly mounted inside the oxygen tank.

For eye candy there’s a high-grade holographic projection system called Kirari! for recreating live speeches and events in real-time — judo and karate matches are the demonstration, of course — in a surprisingly realistic three-dimensional projection that can be set up for a full auditorium with wrap-around screens to create an immersive experience, or as a smaller tabletop version.

There’s also a pod demonstrating the latest tricks to improve online customer experiences, and another showing how Dimension Data worked with the French media company that runs the Tour de France to bring the great race to life for fans — particularly on social media — with the data captured from lightweight Hikob wireless sensors attached to each bike, and a special broadcast truck that helped capture and transmit the data rapidly through mountains and valleys.

One of the CIC’s “use-case pods” explains a secure computation system called San-Shi, which has been used by the Sapporo municipal government in northern Japan to look at tourism, trade and migration data. It will be accessible via Dimension Data’s secure government cloud platform based in the certified-secure Canberra Data Centres, chief technology officer Debra Bordignon told The Mandarin.

In another pod, we learned about a project involving Western Sydney University called Mass Data Observations, which made use of the San-Shi technology and demonstrated how it could be applied in a setting where data from a range of disparate sources is integrated.

Secure computation systems allow users to run statistical analysis on sensitive data without being able to access it directly, and are often presented as a possible way to allow more data to be integrated and analysed with less concerns about privacy and cyber security. CSIRO’s Data61 unit has explored the same general concept.

As exactly those kinds of fears swirled around the My Health Record, a report in the Sydney Morning Herald about a project to upload certain kinds of human genome-related pathology information to the health records demonstrated that any data related to an individual person’s DNA is seen as some of the most sensitive personal information it is possible to create.

Shinohara admitted NTT researchers had run into this in Japan, too, and hoped that Australian academics doing genome research might be more open to using San-Shi.

“In the ordinary realm of encryption, two pillars of security are said to be offered. But in the case of San-Shi, it offers the strongest in-built security, the type of security [that] even super-computers will not be able to solve,” he said.

“In Japan, we are considering the possible application of San-Shi in the medical field.

“For example, we are considering the possibility of applying this technology for statistical processing of human genome information. So the type of calculation which would have taken a year has been shortened to just 20 minutes based on this technology.

“The major challenge for us is that university professors who have access to this type of genome information are not willing to disclose or share that information with third parties.

“Our expectation is that rather than Japan, perhaps this is an area where countries like Australia could actually be more advanced in terms of this usage and development.”

San-Shi’s security relies on a “secret sharing” process, explained Nola, one of several fundamental cryptographic inventions of the 1970s.

“That will be examined, as we commercialise it, by an independent authority, to make sure it’s been done correctly … so I think the issue of the security is probably fine,” he said.

The speed at which San-shi works appears to be one of its key selling points.

“The issue has been processing power, actually, so the ability to get signal, to get sense, to get statistical data out of the information, and it’s been a processing issue,” according to Dimension Data’s Australian CEO.

“And so what’s been smart about this is the way that they’ve managed to configure it, and set the algorithm so it’s very efficient at pulling out statistical data.

“So that’s one answer, and the second answer is in this process, the data that comes out is statistical — the constituent data doesn’t exist in that stream, so the only place you can access it is actually at the point of origin.

“And actually, you know, the point of origin is still an important concern and consideration, and we as a practitioner of good cyber security would always say you need to make sure every point is secure.”

He reiterated the main point that individual records cannot be re-identified from the output of such systems, as they can with anonymised datasets.

The Mandarin asked WSU professor Deborah Sweeney, who was also on hand, to explain what is so unique and useful about the Mass Data Observations project, as it was clear the academics involved were pretty chuffed with it.

Sweeney cited “the ability to engage a wide range of people inputting data in a very simple way using an app” as a game-changer for data collection efforts.

Essentially, the survey respondents do the data entry so the researchers don’t have to, and then get to see how their own results compare to the rest of the cohort. Sweeney said the app demonstrated a form of “gamification” where it was easy to respond and engaging — because it asked a few questions every day, including some about “topical issues” and not the research topic.

She believes the fact that it was easy to use, interesting and participatory explains why five times more students got involved in her WSU trial project than expected.

“The other thing for us as a university is we were very interested in understanding how we could excite our undergraduate students and involve them in the research process.”

“We’ve taken a very open approach to that so … we can work with any type of data and we can platform it any way,” added the CTO, Bordingnon.

“The point is it’s an open platform that we can plug emerging tool-sets into. We can also allow the data explorers to bring their own statistical modelling tools or visualisation tools, or we will offer a whole range of those tools as a service.”