How should pay rates be set for public officials, and does it matter if they are elected or appointed?

There’s three main choices to the first part of the question — normal bargaining with employee representatives, a capped pay-rise policy, or leave it to an independent panel — and they’re all under discussion on the Tasmanian front of public sector industrial relations.

In the Apple Isle, the Tasmanian Industrial Commission is giving politicians a pay rise for the current financial year that is equal to 2017-18 inflation rates, pending a final decision next March. A week ago, the government decided public servants would stay on fixed increases of 2% per annum for three more years.

The Tasmanian branch of the Community and Public Sector Union says the system is unfair, since inflation has recently edged above their capped increase, but Premier Will Hodgman argues they’ve been on a pretty good wicket for the past four years in any case.

Hodgman said last week that State Service remuneration had risen a bit more than 2% a year — 8.8% since he was elected in 2014, while the consumer price index for Hobart only grew 7.1% in that period. He even put out a chart: 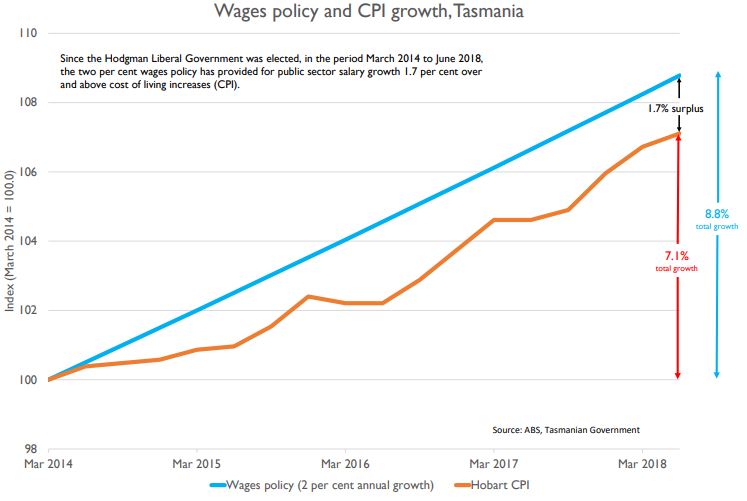 But with inflation picking up, the Hobart CPI for the 2017-18 financial year was 2.4% and the wage-price index for the quarter ending March this year was the same, so the CPSU has complained the different processes have produced inequitable outcomes.

The CPSU has been trying to pressure the government to “scrap the cap” and allow enterprise bargaining “without a pre-determined wage outcome” strictly limiting what agencies can put on the table, so it can go in with 3% claims.

This week, however, its general secretary Tom Lynch suggested that if pay can be set through the independent wage-fixing tribunal for legislators and certain officers of the parliament, then public servants should have the same opportunity, which would allow them to argue their case in a quasi-judicial setting.

“We would welcome an opportunity to get before the Industrial Commission and argue why Tasmanian public sector workers deserve wage increases well above the cap that’s been imposed by this Government.”

One advantage of such a process might be to de-politicise the process of setting public service pay, which can easily become a long, dreary and acrimonious saga wasting the time of everyone involved — as seen at federal level over recent years — given the simple fact that industrial relations is such a key battleground for the major parties.

Parliamentarians got lucky with an inflation-linked pay rise based on the 2017-18 rates, which beat the 2% capped increase as Lynch also observed, and would not have if this happened a year or two earlier. But this is only an interim decision for the 2018-19 financial year, and Hodgman argues he has been more than fair.

“Tasmania has an excellent, dedicated and professional public sector,” he said last week. “They deserve to be well paid, and are, especially in comparison to the private sector with the average cost to the budget of a full time public servant being around $110,000 per year.”

He said the union had been pushing “misleading and false” claims that public service pay rises had been below inflation. Then the Premier confused matters by throwing some national forecast figures from the Reserve Bank into the mix with the actual retrospective figures sourced from the Australian Bureau of Statistics, used in his chart and by the Industrial Commission.

Hodgman said the RBA forecast CPI would be 1.75% in 2018, so the public servants were doing well, even though it appears that the rate will be much higher in Tasmania’s capital city.

“In the interim, once-off declines in some administered prices in the September quarter are expected to result in headline inflation in 2018 being a little lower than earlier expected, at 1¾ per cent.”

Hodgman also explained why actual increases are more than the 2% cap — “a significant number of public servants [are] to receive additional pay rises after every 12 months of continuous service” — and said this was far better than most Tasmanians would get from private-sector employers.

“The Government believes that public servants deserve a pay rise, but it must be affordable,” he added. “Even an additional pay rise of an extra one per cent would cost an additional $28 million per year meaning that we would have less to invest into hiring more nurses teachers or other front line workers.”