There is a sense, however, that the lines of communication between academia and the public policy sausage factory have become attenuated, due to increased partisanship and growing risk-aversion that has led governments to build ever-higher walls around departments and agencies, and post gatekeepers to tightly control the information that flows into ministerial offices.

There’s always a tendency to imagine things were better in the good old days, however. Perhaps the rise of evidence-based policy has perversely helped drive increasing partisanship, as particular segments of society feel their interests are being marginalised by heartless economists and uncaring technocrats, and political leaders forget the sweet art of persuasion.

“Researchers often think that their evidence speaks for itself,” observed Monash University political science professor James Walter, opening up a get-together in Canberra for public servants and academics to discuss “redefining the research-policy interface” earlier this year.

“That sort of hubris is misplaced,” he added. “Academics still have to be persuaded that research needs to be crafted and communicated in relation to the concerns and priorities of the policy community, and its need to find solutions for very particular problems on very constrained timelines. Career incentives for academics should include this element.”

Rather than lectures, a deeply experienced lineup of eminent speakers provided quick bites of food-for-thought and asked attendees to chew them over during the workshop-style event, jointly hosted by the Academy of Social Sciences and the Institute of Public Administration. A few key points were raised throughout the day:

Walter observed that when the rivalry between the major parties gets more intense, policy continuity across changes of government is less likely and the divide between the two worlds grows deeper.

“It becomes ever more difficult to align research and research timelines and the implementation of evidence-based initiatives with abrupt change in political cycles and policy directions,” the professor said.

“Researchers who formed useful relationships through high-level contacts under the auspices of one government are sometimes disqualified from continuing such work under another.”

University of Queensland pol-sci professor Brian Head, one of several speakers with experience at senior level in both worlds, observed later: “There are issues about turnover of staff, particularly in the public service… It is very hard to build relationships if people are changing positions all the time.”

Lin Hatfield-Dodds, who heads up social policy at the Department of the Prime Minister and Cabinet, believes the orthodox “public policy tool kit” needs a few more instruments added, to deal with increasingly unorthodox times. She sees a global risk of runaway inequality, and rising concern that democratic leaders are losing control over the direction of social change.

“Are we in a geopolitical recession? Is the West fracturing? That goes to issues of trust in government, transparency, speed of information, data, all that sort of stuff,” she said.

“Governments and public servants, in particular, talk a very good game about data. Observationally over the last two years I have been in the service, we are not that good at gathering quality data and making it transparent to the public. That is probably because our ICT systems are not all they could be.”

Hatfield-Dodds noted political populism was on the rise amid growing “uncertainty about the future of work” and “challenges around the free movement of people around the globe” as well as technological advancements creating massive new opportunities for humans to do both good and bad.

“There could be huge inequality if we do not think in a really strategic public policy way about all of that.”

On the domestic front, she said the key issue to her mind was the changing nature of families.

“Look up any AIHW research and it will tell you how it is changing. But almost all our policy settings around individuals and families, particularly our payment system regulations and requirements, are set around a heterosexual family with biological children where people partner over a life course. None of that is particularly normed anymore.”

Then there are labour market changes, population pressures in Australia’s four big cities, and the difficulty of trying to encourage people to spread out more. There was a murmur of agreement with Hatfield-Dodds’ final point:

“I think our biggest structural issue in public policy in Australia is that the Australian population wants it all and is not prepared to pay for it. How are we going to tell that story to the population? If we cannot crack that nut, everything we do with government is playing around the edges.” 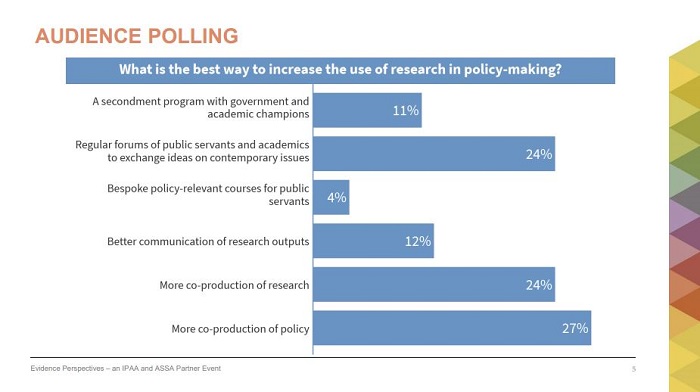 Jo Evans, the deputy secretary responsible for climate change and energy innovation at the Department of the Environment and Energy, pointed out that the market for advice has become very crowded.

“We really are in an environment now where the ministers, the decision-makers, get information from anyone and everyone and from a variety of quality of sources — some great, some more like opinions,” Evans said. “A really diverse range of views is coming forward.”

“Public servants have to be aware of them and they have to find ways of synthesising that and actually presenting then a coherent piece of advice to ministers, which is a very difficult thing to do when everything is moving very fast.”

It’s not surprising that ministerial office staff now play a far more influential role than in the past given the cacophony of voices. Evans said in her 17-year career she had seen a change: departments were expected to consider a range of perspectives and give holistic advice; now they more often respond to specific requests for narrower advice.

“So the challenge has become: how do you frame that advice and give that advice so that it is still consistent with a broader strategic picture or way of thinking, but is still being responsive to the specific thing that you have been asked to deliver?”

Her third point was that government departments struggle with information overload, in these data-rich times, as Hatfield-Dodds suggested.

“Again, it is not the same as years back when there was one authoritative source of information that you could go to. Now we have so much to deal with and, as Lin said, we are not particularly good yet at dealing with all of the data to frame our advice.”

Professor Anne Tiernan from Griffith University believes there is more of a problem with implementation failures and a loss of institutional memory meaning the lessons of past mistakes are forgotten, than there is a lack of good ideas making their way into government departments.

“But institutional memory resides in policy communities,” she added. “I think this concept is too little understood in the public sector.”

Tiernan advocates public servants “getting out and mixing in more diverse, less hierarchical advisory systems and policy communities” but also believes it has become more difficult. Everyone needs to get over themselves and work together to interpret “the practical lived experience” of real people and why they hold such a broad range of perspectives, she said, and public servants should also be more willing learn from experience of other governments, especially across the tiers of the federal system.

The political scientist and public sector veteran said that although the supply of advice had grown to a deluge, the flow into ministerial offices had “narrowed in really dangerous and unhealthy ways that are not serving ministers very well”.

Get to the point

Gordon de Brouwer, a former economics professor and public servant in addition to being the immediate past IPAA ACT president, had a simple piece of advice for academics from his time as a departmental secretary: get to the point.

He recalled a very effective series of five-minute briefings for his then-minister from a large group of academics, spread over four half-hour sessions. Each explained just one or two important points; if they made an impression, the minister’s officers could always call back and request more details.

“That was one of the best things I have ever seen in my professional life, [to] bring ideas and insight — the conceptual frameworks and the evidence – in a really distilled fashion for a minister that we could then draw on over succeeding months to flesh out,” de Brouwer said. “It was quite an influential exercise.” 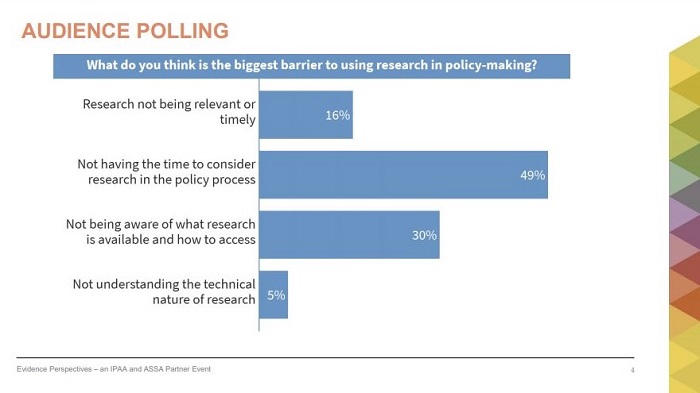 The importance of relationships between scholars and public servants was the main theme of the day, as observed in a closing summation by another emeritus professor on hosting duties, Meredith Edwards from the University of Canberra.

“Researchers do not always get it right with [public servants] because they do not have access to the right data, apart from the context of the policy issue,” said Edwards, another scholar with experience as a senior bureaucrat. “Access is a big issue, and I am sure there are ways that we can improve on that.”

There was broad agreement that regular contact between people crafting public policy and scholars in related fields – through ongoing dialogue, interaction, secondments, roundtables, workshops – is extremely valuable to both.

Forum participants had also raised a lot of challenges, on both sides of the equation, but she also saw a lot of enthusiasm “to do something better” by getting out more to understand community perspectives, anticipate emerging issues, and think beyond orthodox or traditional approaches to public policy.

“I went off to the ANU at one stage for six months, and that was the beginning of the child support scheme,” Edwards recalled from her own public service days.

“I had time to reflect. I had time to think. I do not believe that we would have got nearly as far or got there as fast if I had not had that opportunity. Similarly, it happens the other way and you get the context. In respect of anticipating issues, you need that space. You need time in your diary, in your week or at another institution.”

A full transcript of the discussions on stage is available from the IPAA ACT website.