The Victorian Ombudsman has been unable to establish wrong-doing by the state’s Education department secretary and recommended no further action be taken on claims she threatened a school employee with funding cuts over evidence he was due to give in court.

In what was described by parties involved as a high stakes matter before the Supreme Court, the principal of Parkville College felt he was threatened with funding loss if his testimony was not favourable to the department. His testimony was instead damaging to the department and he was subsequently investigated for leaking, disciplined and ‘separated’ by mutual agreement.

The case was no small matter. What began with riots at Parkville Youth Justice Precinct in 2016, resulted in children moved to Grevillea, a newly created unit within the the Barwon adult maximum security prison. Simultaneously, the Department of Education and Training was exploring an MOU with the Department of Health and Human Services to deliver education services to children in these environments, as well as identifying a pathway to accreditation for learning for the young people at Grevillea.

The pressure for DET was immense, Ombudsman Deborah Glass notes: “Not only to deliver education services, but to be able to say they could deliver education services, in response to the plaintiffs’ allegations that DHHS was failing to meet its statutory duties to provide young people with education in a registered school. While the impending court case and deadline to execute the MOU were coincidental, both brought into stark relief the question of exactly what services DET could provide young people at Grevillea.”

DHHS, which at the time was responsible for youth justice, lost that case, with the Grevillea unit declared unlawful.

There were more inquiries, including a parliamentary inquiry. Some of that evidence, implicating Education and Training departmental secretary Gill Callister over improper conduct relating to the Parkville principal, was referred to Glass for consideration.

Glass found the evidence conflicting, and recollections and interpretations murky against a background of immense pressure for the parties at the time.

Callister and another senior departmental official called the principal, Brendan Murray, just one business day before he was due to testify in the Supreme Court case. Ostensibly the call was to be about ongoing funding matters. Glass says this was “injudicious” — but the central allegation of threatening Murray was “not substantiated”.

The actual contents of the Friday call are disputed, with recollections and notes of the two main parties, and a third official, all differing. There was another call on the Sunday. When Murray stepped into court the next Monday, he texted a colleague to claim he felt threatened.

Meanwhile DHHS secretary Kym Peake — the defendant in the court case — and Callister also texted each other, in particular about Murray’s testimony. The pair are friends, Glass notes. 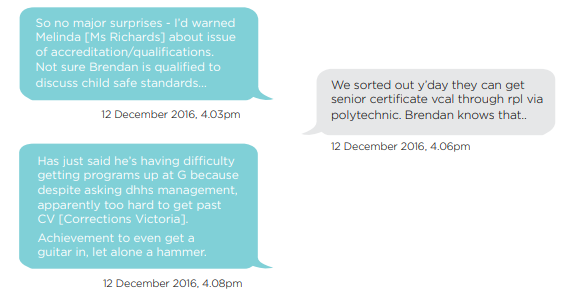 Callister told Glass there were four separate events that have been ‘artificially linked’: the Friday phone call, the Sunday phone call, the text messages [with Ms Peake] and Mr Murray’s evidence
about the accreditation issue. Glass writes:

“She noted that Mr Murray agreed there had been extensive discussions about RPL over the weekend however he did not disclose this under cross-examination in court, which could have been construed ‘as him having no knowledge of this issue’. Ms Callister submitted that ‘it is fair to conclude that Mr Murray had less interest in the resolution of this issue than in maintaining consistency with his proof of evidence’.”

Glass concludes that there is also no doubt the principal felt intense pressure following the calls from his bosses in the days leading up to his appearance in the court case, and the judgment of all involved can, in different respects, be called into question. However, she believes all involved believed they were doing the right thing:

“All those involved are, however, human, and it is not surprising that human judgments made in the heat of the moment can be questionable.

“I have little doubt that all involved in this saga believed they were doing the right thing: that departmental officials not unreasonably wanted answers to complex questions involving the delivery of education services; and that the principal – a passionate social justice advocate – believed he was acting in the best interests of the young people in custody, albeit while breaching his duty to his employer. The principal is not a subject of my investigation and in any event is no longer employed by the department. The conduct of all has been subject to intense – I have no doubt, uncomfortable – scrutiny.”

Whether the matter is dropped is now up to the Victorian parliament.