Government faith in competition in human services “appears to fly in the face of experience”, while the difficulty of getting complex regulation right is overlooked, argues a report published by the Australian Council of Social Service and Choice.

The paper assesses two areas of human services where choice, contestability and competition have played a significant role in recent years — vocational education and training and employment services, examining outcomes achieved when different levels of competition have been in place.

“We need to seriously rethink the competition agenda in human services.”

The competitive models introduced into these two sectors have largely failed to deliver better outcomes for consumers, and have caused major barriers to improving collaboration, they argue.

“The report’s findings show there are significant risks in introducing further competition into human services, particularly as the benefit to people is doubtful, and is not evident in these two examples,” says ACOSS CEO Cassandra Goldie.

“Where competition has been introduced in vocational education and training, it’s led to rising costs, people being placed in inappropriate courses through aggressive sales practices, and a significant reduction in quality across the sector.

“In employment services, ‘marketised’ service delivery has led to private providers focusing their efforts on people who are job-ready rather than people who need more assistance. That’s part of the reason why so many people remain unemployed for 12 months or more.

“Further, choice for people who are unemployed is severely restricted by the harsh benefit compliance system, which employment service providers play a major role in administering. The current model of employment services, and its predecessors, have left people behind.

“Finding examples of human service delivery areas where more intense competition or contestability leads to better services is challenging. All too often, any benefits are outweighed by new risks imposed on service users such as high turnover of service providers and the cost-cutting strategies often pursued by for-profit services.

“We need to seriously rethink the competition agenda in human services, to ensure we don’t keep making the same mistakes in service delivery that can have a devastating impact on people.”

The Productivity Commission released a report earlier this year advocating for greater use of competition in some human services, including social housing, dental care and end-of-life services.

Choice CEO Alan Kirkland argues competition should only be pursued where it is going to lead to better outcomes for consumers.

“Introducing competition into sectors like vocational education and training appears unlikely to help consumers, and could in fact be harmful,” he thinks.

“Our first priority should always be to ensure that people have equitable access to good quality services. Competition, especially where it involves for-profit service providers, should only be pursued where it will help achieve this.”

The ACOSS-Choice report analyses some of the key problems with marketising human services.

Despite extensive regulation, scandals periodically arise, in part thanks to providers’ pursuit of profit. Government responses to these unintended outcomes result in constant regulatory flux, which leads to risk averse behaviour among providers and disjointed implementation.

The resulting complexity of the system favours big incumbents, who “pursue strategies that mean they are being simultaneously less risky and more profitable”, making innovation difficult and increasing barriers to entry for new providers, undermining competition.

Cherrypicking is a problem — it’s often much easier and more cost effective for employment services providers to help those already most capable of finding a new job, leaving tough cases for someone else to deal with.

Competition can also discourage collaboration between providers, which would improve services.

“As regards the government’s general approach to policy reform, there appears a strong tendency to overestimate the benefits of competition, while underestimating the complexity of getting the right regulatory structure”, the report argues.

“To this end, the costs of ‘learning by doing’ are largely disregarded, even though it is extremely disruptive to have sectors in a constant state of policy flux. Nonetheless, there appears to be an unshakeable faith that, with the right regulatory framework, the benefits of competition will be delivered and will be worth the attendant costs (both to the community and individuals).

“On the basis of the case studies contained in this report, such faith appears to fly in the face of experience.”

The report also looks at the characteristics of marketised human services that can make them work well.

It sets out a framework, illustrated in the form of a quadrant, for assessing the likely outcomes of different circumstances. 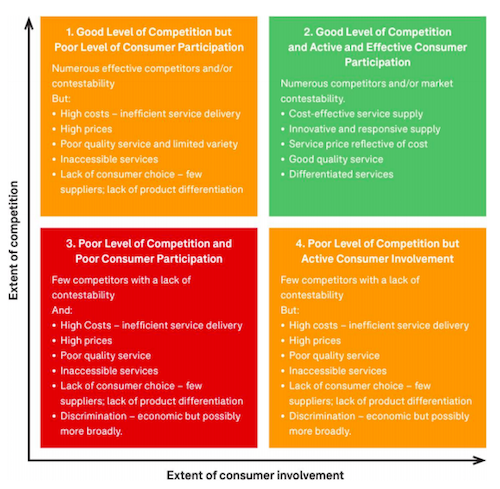 A market is more likely to work if it includes high customer involvement and greater competition, the report argues:

“It is only in quadrant 2 that there are both actual and potential competition and good outcomes for consumers. For these services, there is plenty of actual competition and/or service delivery is contestable because entry barriers are low and there is sufficient demand to enable numerous suppliers to operate sustainably.

“Genuine contestability requires low sunk costs, access to relevant technology, access to consumers (that is, adequate uncontracted customers who are able to switch suppliers), and an inability on the part of the incumbent supplier to engage in strategic exclusionary strategies quickly enough to prevent entry.

“Meanwhile, consumers must be well informed, willing to use that information to make choices and able to switch service providers without too much difficulty or cost.”