One of the federal government’s newest departmental secretaries, Dr Steven Kennedy, disputes the narrative that the Australian Public Service has experienced a severe capability decline over recent decades.

However, with the Commonwealth getting back into directly delivering major policies through independent agencies and government business enterprises, he does see a need for the APS to “rebuild” some capacity to help government establish and manage such bodies, by playing the role of shareholder on behalf of the public.

He observed that “the capacity to establish and appropriately govern institutions such as the [National Disability Insurance Agency] and government companies such as the Western Sydney Airport” is now back in demand after the federal government’s footprint shrunk in the 1980s and ’90s.

Kennedy said efforts to fortify that sort of capability were underway, and the public service had no problem attracting the best and the brightest.

The secretary of the Department of Infrastructure, Regional Development and Cities gave his thoughts on areas the current APS Review panel “might like to consider” during a speech last night that covered the changing role of the public service, in the context of key issues on his plate: population growth, regional economics and infrastructure.

“There is a suggestion in many people’s conversations about the public service that there has been a loss of capability,” he told the mostly academic audience who turned out to hear the speech, hosted by the Australian National University College of Business and Economics. 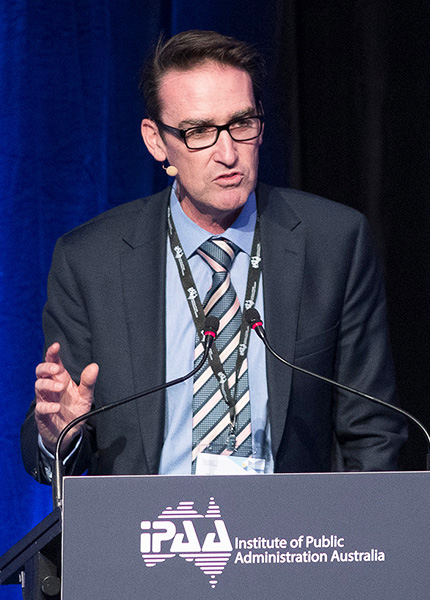 “I don’t agree with this. For example, the quality of graduates the service takes in every year is of the highest order. We continue to have little trouble attracting committed and motivated staff with excellent academic credentials, and this has been the case for many years and it’s a great starting point to build a highly capable workforce.”

Kennedy praised the important roles played by the diverse assortment of public bodies whose leaders sit outside the public service (but whose staff are typically drawn from it) over the years.

“The use of bodies that sit apart from departments, and often established through legislation to deliver government policy, is a long-term trend and a trend I think that has served governments well,” he said, explaining his interest in the role of such bodies came from working at the Australian Bureau of Statistics.

Kennedy believes bodies like the ABS, the Reserve Bank, the Productivity Commission, Infrastructure Australia and various regulators that enforce rules in specialised areas, or perhaps even the Tax Office, have been highly effective in general, allowing the government sector “to build sustained capability in a way departments can struggle to do”.

But they also need checks and balances in place.

“Institutions are not without fault,” he added. “Their greatest strength is their biggest weakness. From expertise and uniqueness of role can arise inflexibility, arrogance and insularity. But in the main, Australia’s institutions have managed these tendencies well enough.”

“The pressure on departments, on the other hand, to serve governments across the torrent of issues governments face on a daily basis, is substantial. And my view is departments are having a much harder time of it than institutions, both from a time and content perspective.

“The increasing load on departments, for example, for short-turnaround briefing is substantial — and I think it’s an important and real demand that has to be met. I don’t regard it as a distraction from the real work of the public service, but it is one that the public service has to respond to, and it’s one that we can through capability, culture and structure.”

Setting the concept of expertise apart from capability, the PhD-qualified economist suggested the APS also needed to develop more of the kind of “deep expertise” that governments looked for when they set up dedicated, independent agencies or government-owned companies to implement major policies.

Running through quick snapshots of APS statistics and structure from 40 years ago, 20 years ago and today, he noted the approach of federal governments had swung away from direct delivery of their policies and discharge of key responsibilities through independent public bodies, towards more privatisation and smaller government in the 1990s.

A key theme of Kennedy’s comments was that the pendulum has started to swing back again, although not right back to 1978, with the establishment of companies like the NBN, Moorbank Intermodal Company, and Western Sydney Airport, as well as big new investment in the existing Australian Rail Track Corporation for inland rail, the federal buy-out of Snowy Hydro, and a strategy to re-establish a local defence industry while investing in military capability.

He also noted the establishment of the National Disability Insurance Agency to deliver the NDIS, rather than doing so through a division of a department, as part of this trend. Its work, he pointed out, would “increase the scope of government” by a “very substantial” 2.3% of Gross Domestic Product by the 2040s.

The APS workforce is now about 0.6% of the population, compared to about 1.1% in 1978, and 0.65% in 1998. While government expenditure has remained roughly a quarter of GDP in that 40 years, the proportion spent on welfare — the main area of direct service delivery for the APS — had grown from 28% to 36% by 1998, where it remains despite the population growing a lot from 14.4 million to over 25 million.

Compared to 20 years ago, Kennedy believes “the public service is expected to be much more adept than it has been in the past, particularly at providing services, particularly with that focus on welfare expenditure”.

“And that’s not only to keep pace with service delivery but also because of a growing number of Australians the public service is expected to serve,” he said.

As just one example of where the APS needed to continue developing expertise, Kennedy nominated “professional services” related to analysing global trends, as well as in the delivery of welfare services, which represents the largest proportion of federal expenditure directly delivered by the APS.

“A colleague of mine once suggested that the approach to expertise in the public service must be of a serial expert,” he added.

“Public servants must spend sustained time on issues. They must be trained, and they must engage with business, the community and academia. And this, I think, can avoid the curse of the gifted amateur, where smart and capable people, not married with deep knowledge, make unnecessary mistakes by not seeing subtleties.”

Going on to risk management, Kennedy noted the “immense” pressure on departments to be get everything right, and said the response from public servants should include talking to the community more often.

“The response to this heightened expectation can’t be to take less risk, or not take the appropriate level of risk in pursuing policy. Instead the approach has to be about opening up a conversation with the community about why the risk is worth taking, the returns that can be derived, associated with an honest conversation about [what happens] when it doesn’t come off.

“I can tell you that’s a lot easier to say than it is to do.”

We can’t do it alone

The DIRDC secretary said “fragmentation, or silos” was a constant issue “both within and across departments, and between public services” at state and federal level, choosing to focus on the latter and how it related to his department.

“There’s a need for the federal public service to be far better connected to state and local government public services,” said Kennedy.

“And what I would also say is many of those policy issues we confront are complex; they’re multi-faceted and they require the skills of public servants familiar with the challenges across all levels of government.”

He referred to Nicholas Gruen’s “quite insightful take on these issues” in which the economist (and regular contributor to The Mandarin) describes issues as either thick or thin problems, depending on how much complexity is involved and how many different stakeholders and experts must work together to find workable solutions.

To rebuild trust, a good place to start is engagement

Finally, he offered some brief thoughts on public trust, which he identified as an important area for the APS Review to consider.

“The public service’s ability to execute its many functions relies on trust,” Kennedy said. “In most developed countries, trust in government is at record lows. This is also the case in Australia, as shown in the Edelman index.”

But, he noted, public trust in some front-line government employees like nurses, doctors, teachers and emergency services remains relatively high.

“My theory would be that the direct exposure that the community has to committed public servants such as nurses is an important element of this trust,” he added.

“So, to rebuild trust for those of us not in those services, a good place to start in the face of a community that’s increasingly sceptical about the service, is with more engagement. More engagement with the community, with business, with academics, where we can test ideas, be straightforward about what government expects in our various policy domains and, very occasionally, take a risk.”

Later, he was asked for an example of what that would look like and nominated community consultations in Western Sydney, related to the federal City Deal — a policy he noted was roughly matched by the opposition’s City Partnerships, and a similar policy in the United Kingdom.

This process involves a lot of collaboration between federal, state and local governments and discussions with local people about building a new airport and other infrastructure to cope with a booming population.

While in the UK, the policy involved a lot of devolution to local government, he said Australia’s three-tiered system meant that collaboration between the levels of government was the name of the game. Working with councils particularly makes engagement much easier for federal public servants, he said.

“It’s really herding the cats; aligning the three levels of government about exactly what it is they’re trying to do, and using that as a set of … governance mechanisms that then allow you to engage more directly through the community. And it’s through the councils really that we get our most active engagement with the community.”